The Bush Telegraph & The Poll Tax 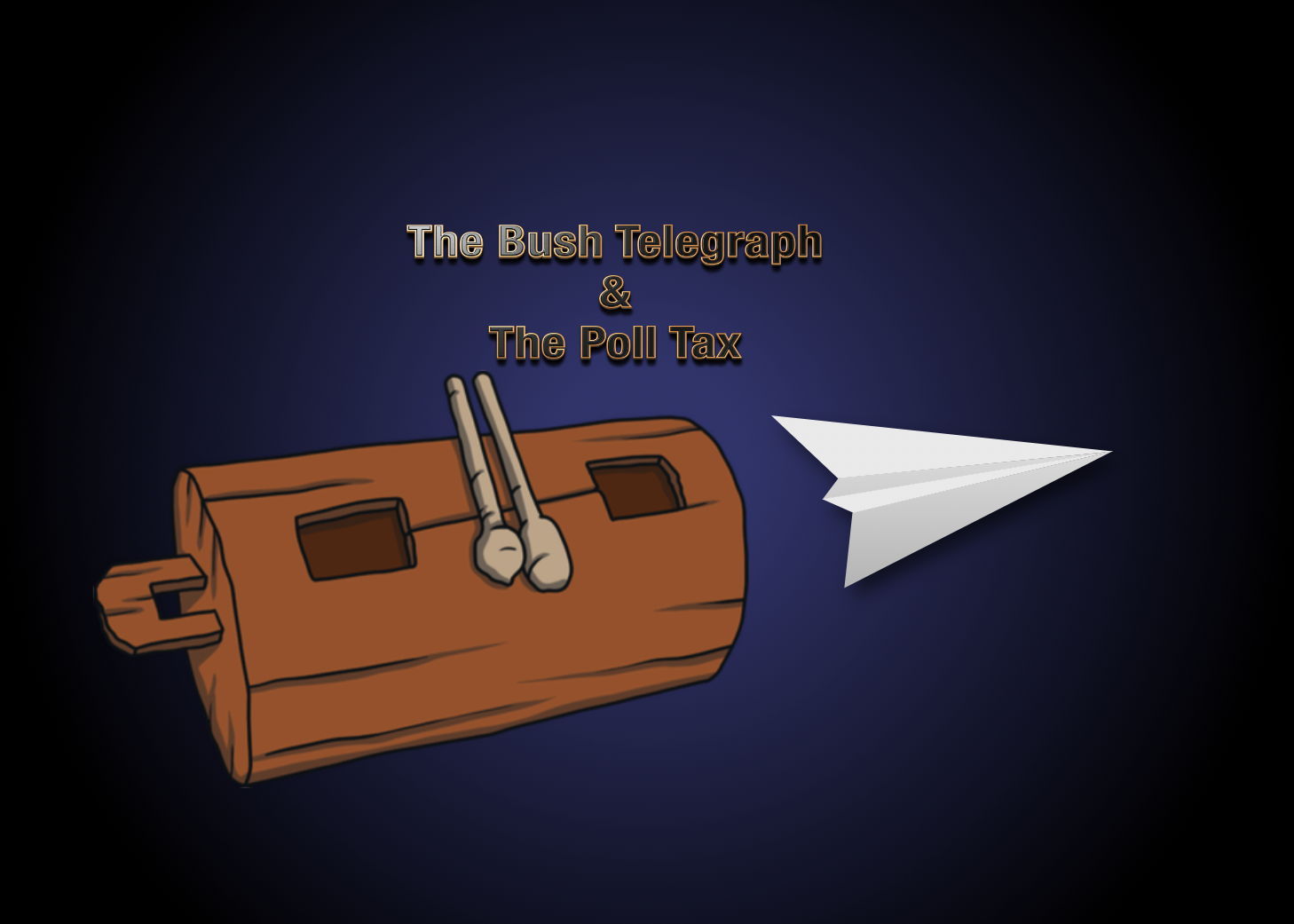 Semi lucid and still fluttering delicately to unfold itself from it’s multilayered lustrous sheaths, the dawn had just begun to announce itself tentatively with a bluish and milky tone. It’s shy demeanour brushing lightly upon the sleeping community, still immerse within its colourful reveries and blissful dreamworlds. Some bold cockerels had also equally began to offer their own break of the dawn announcements with a raucous accompaniment, somewhere in the distance a church bell rang, when suddenly the quietude of the dawn was shattered by a series of high pitched, searingly distressing and agonised SOS cries. The imploring cries rippled sporadically like high velocity waves in short staccato spurts across the semi lucid dawn, furrowing deep at the core of conscience and evoking feelings of dread and a foreboding of an unknown terror being visited on the community. It’s feverish intensity, quivering with a palpable weightiness of fear and anguish, sweltered against the auditory senses in the early dawn like piercing hot coals.
The cries, interspersed with chopped off sentences were harrowing and deeply imploring for any form of an imagined divine intercession or just a modicum of human mercy from the source causing the distress and pain. There was none forthcoming, at least not in the pressing moment, as the crescendoes of the multiple pleas kept increasing, rising and then waning within the seemingly indifferent atmosphere of the harmattan morning.
A few doors creaked timidly, shadowy forms suddenly emerged furtively behind the half opened doors, peeking apprehensively out unto the dusty road in curiosity to gauge what was amiss. Their apprehensive motions, mysteriously communicating itself to the atmosphere that was now pregnant with tension. It was an intensely emotive vocal appeals which had engulf the air, penetrating like incantatory shrapnels, incessantly piercing and cutting through the quietened atmosphere. It was being directed as prayerful supplications to any unknown powers far beyond the thresholds of time and equally as layered ululations towards any family members or friends nearby and for any human being with a compassionate heart who could possibly be concerned enough to intervene.
The perturbed voices from the distance floated and intermingled with the brazenly bold and loud announcements from those early cockerels that were up and about. The sound of running feet and stomping further amplified and dramatised the bizarre cacophony of voices. These raucous birds are nature’s brash and self appointed unofficial time keepers. This particular morning, the thickened layers of the imploring vocal appeals were interweaving with that of nature’s own organic sounds, and creating a taut atmosphere of fear, trepidation and anxiety. It was shattering the delicate harmony and that inexplicable sacredness of the dawn which often hangs over the communities like a silent ineffable diaphragm of compassion.

The approaching dawn continued to rapidly negotiate its way against the receding night, as radial and diagonal streaks of the Sun’s fingers had now begun to emerge from behind the distant hills. The light was tracing orange patterns and contouring the horizons, painting the day with a vibrant urgency of unknown happenings still yet to unfold. The sun was also introducing itself and throwing the light of conscious logic and rationality when everything can be visible underneath its watchful eyes.
The young perceiver, caught up within the unexpectedly taut environment of uncertainties and inexplicable tensions of unknown proportions, had just step out of the house in preparation for another day of school. This morning was totally different, as the tiny and dusty road which was just a few meters away from the house seemed populated with a continuous flow of swiftly moving shapes. The blurry outlines of these moving forms, camouflaged within the enfolding shadows of the dawn, were so fast and furious, the resultant fleeting imagery seemed at first sight, to be diminutive revolving oil drums rolling along the road at extremely high speed. On closer inspection, it turned out to be human beings in motion, diminished in stature because of the necessity of speed, their speeding forms accompanied with heavy panting, laboured and anguished grunts which were emphasising extreme muscular efforts in syncopation with the sound of swift footsteps.
There was the occasional free flowing outburst of curses or loud exclamations; “Mah’bouh ooooh!”, “Ah yah!”, “Wéh ngéh zum ooh”, “Nkwi’fon ni t’chu”, “Ndou ngwé n’fon”, as the runners swiftly navigated or manoeuvred their way around hurdles or accidentally kicked a stone on the semi dark and dusty road, a thing which can be most painful in the harmattan cold. Even those famed Olympic athletes would not have been able to match or catch up with these incredibly fast and nimble footed runners, their forms whizzing down the dusty road disappearing in the distance in a cloud of dust.
As soon as they had negotiated a bend and disappeared down the road, it was just a matter of a few minutes before another set of runners came running furiously behind them. On closer inspection again, these ones seemed to have whistles hanging and dangling around their necks. Their brown khaki shorts and cumbersome footwear could be made out as they were not as fast as the previous runners who had disappeared down the road. These pursuers it would seemed were some kind of officials, as their grunts and panting sounded authoritative and more like bottled up frustrated vocal outburst, tinged with an intimidating intent and unvoiced threats, should they catchup with their elusive and fleeing preys.
Suddenly there was commotion and pandemonium within the entire neighbourhood. The unusual noises from the runners, the shouts from their pursuers and earlier cries had disrupted the dawn’s normalcy and surreptitiously awakened the neighbourhood to the reality of an approaching threat and the spectre of imminent danger. The atmosphere reek of the intimation of malevolence, cunningly concealed beneath the respectability of uniforms, a cold and calculated predawn raid, filled with malicious intent and the perpetration of terror and infliction of pain.

Simultaneously the community’s bush telegraphic alarm and alert system kicked swiftly into action. High pitched voices, began to chant and recite the alarm towards all directions, setting off an immediate chain reaction which in turn was relayed and echoed far and wide. The alarm was now being reiterated and reverberating all over the place as doors and windows noisily cracked opened, figures came tumbling out through windows without a pause to look left or right nor stop to make verbal inquiries. The people were quickly disappearing into the bushes behind their houses as the rumble of hundreds of feet filled the atmosphere as more voices sounded the alarm as far and wide as their acoustic reach could muster.
That single word, “kalé kalé”, poignant and immensely potent had spurred the entire sleeping communities into quick action and motion. There was panic, a palpable tension in the atmosphere, tangible and dripping like coal tar to the sensory systems and delving deep into those existential areas where a being feels threatened and helpless.

Pa Man’grou, as he was affectionately called, who often supplied the communities with succulent mango fruits, on hearing that single word, “kalé kalé”, in his morning reveries had simply hurtled himself out of bed without any shirt and whizzed out of his house in a flash just like a mudfish in muddy waters, disappearing into a dense thicket of foliage, plantains, avocado trees and elephant grass.

Aba’ah’tóh, on his way to the morning market, with a tray of fine Kumba bread on his head and whistling lightly with a knowing glee, satisfied with the imagery of imagined profits to be harvested from the early market traffic, on hearing the bush telegraph had unfortunately opted but to scramble quickly up a giant honey mango tree that was along the dusty road. His abandoned tray of bread on the wayside was the giveaway trail which had led some of the merciless pursuers underneath the tree where he was perched at the top. His hollering, weh mer..! Officer ah abeg norh, Papa dem, nah only bread ah carry for go sell for buy Merecine, fell on deaf ears as his muscular pursuers demanded he climbed down from his ill chosen hideout.

N’yam’bou’gong, the orphan who lived with his grandfather up the hills, on his way to the market to hawk his firewood had managed to expertly elude some of his pursuers, by cleverly leading them through some swampy raffia bushes within the area, leaping in some instances for several feet across carefully chosen swampy spots to safety and leaving some of his determined pursuers dazed and stuck in the mud, cursing and swearing thunder.
At the road junction which leads to the heart of the city, a subdued crowd had been carolled unto the dusty ground. They were made to sit on the dusty roadside with bowed heads. Those unfortunate individuals who had been captured looked despondent and helpless. Some of their uniformed captors stood above the captives, brandish long kassingos in their hands with that air of impunity and triumph. There were armed police and gendarmes too, standing guard in case anyone would imagine an escape or attempt to flee. Three large Ngon’goros stood by, their engines idling. Written boldly on the sides of one of the trucks were the words. Government for the People by the People. It was the day of the Poll Tax Collection.

The Witness and The Metallic Ant

This site uses cookies. By continuing to browse the site, you are agreeing to our use of cookies.

We may request cookies to be set on your device. We use cookies to let us know when you visit our websites, how you interact with us, to enrich your user experience, and to customize your relationship with our website.

Click on the different category headings to find out more. You can also change some of your preferences. Note that blocking some types of cookies may impact your experience on our websites and the services we are able to offer.

These cookies are strictly necessary to provide you with services available through our website and to use some of its features.

Because these cookies are strictly necessary to deliver the website, refusing them will have impact how our site functions. You always can block or delete cookies by changing your browser settings and force blocking all cookies on this website. But this will always prompt you to accept/refuse cookies when revisiting our site.

We fully respect if you want to refuse cookies but to avoid asking you again and again kindly allow us to store a cookie for that. You are free to opt out any time or opt in for other cookies to get a better experience. If you refuse cookies we will remove all set cookies in our domain.

We provide you with a list of stored cookies on your computer in our domain so you can check what we stored. Due to security reasons we are not able to show or modify cookies from other domains. You can check these in your browser security settings.

These cookies collect information that is used either in aggregate form to help us understand how our website is being used or how effective our marketing campaigns are, or to help us customize our website and application for you in order to enhance your experience.

If you do not want that we track your visit to our site you can disable tracking in your browser here:

We also use different external services like Google Webfonts, Google Maps, and external Video providers. Since these providers may collect personal data like your IP address we allow you to block them here. Please be aware that this might heavily reduce the functionality and appearance of our site. Changes will take effect once you reload the page.

The following cookies are also needed - You can choose if you want to allow them: